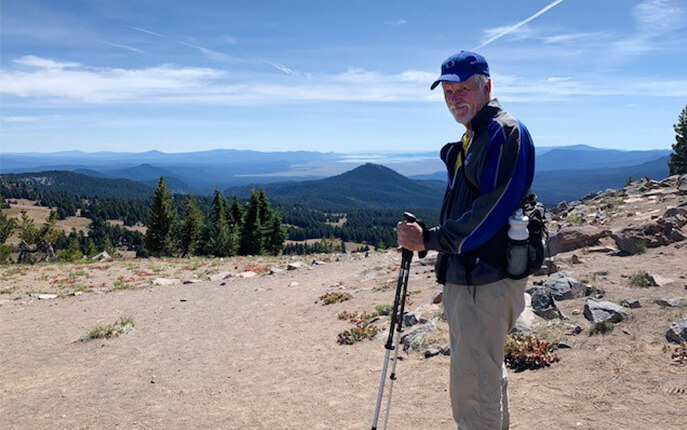 When Rob Buys was 35, he had an echocardiogram to diagnose some heart palpitations he was having. When he heard the results, he spun them in his favor.

It would be 15 years before Rob’s symptoms got severe enough to worry him. His feet swelled and his active lifestyle was getting more difficult to maintain. Eventually, after having a pacemaker and then an implanted cardioverter defibrillator (ICD), Rob’s condition deteriorated to the point that he needed a heart transplant.

Today, at age 67, Rob goes hiking, rides his bike and plays tennis. “I consider myself to be the luckiest person in the world,” he says. (*Please read medical disclaimer below.)

Rob, who is an ophthalmologist, has always been very active. But when he turned 50 he noticed some changes. “My cardiovascular abilities seemed to be going down, even though I was still running,” he says. “And my feet had started to swell.”

Still, he was more frustrated than worried — he had always tried hard to stay in good shape. When he finally had an electrocardiogram test (EKG), it showed he had, an abnormal heart rhythm that can be associated with dilated cardiomyopathy (DCM).

Rob’s wife Susan, who is a physician, was alarmed. “I remembered taking his pulse and thinking that it was really slow,” she says. “When I saw his EKG I thought, here’s the evidence.”

With the information from his EKG, Rob’s attitude about his health began to change. He calls it his three stages of life.

“At first you don’t even think about your heart,” Rob says. “Then I denied that my condition would cause any problems and I wouldn’t need a transplant. The third stage was when I thought, ‘Please, let me have a transplant.’”

Thinking back, Rob believes that his father also had DCM.

“He lived into his 80s, but he had a pacemaker and suffered from the same symptoms I did,” Rob says. “They started about ten years earlier for me, but I followed his course except that I was getting progressively worse.”

Rob’s sister and brother also have heart conditions, though they don’t know if they have DCM. Rob intends to have genetic testing with the DCM Project at Ohio State University, which will give researchers there more information about the genetics associated with DCM.

After Rob’s EKG, he was put on several heart medications and had a pacemaker implanted to regulate his heartbeat. That gave him confidence to travel, and he and Susan went to Greece. But as they were walking along cobblestone streets near the Parthenon, Rob briefly passed out.

“He got up and we walked back to the hotel, but he had probably been in ventricular tachycardia,” Susan says. “He was a complex patient. When we got back to the U.S. he called his cardiologist and she said, ‘Get right in.’”

Rob and Susan flew home to Portland, Oregon, where his pacemaker was replaced with a pacemaker/implanted cardioverter defibrillator (ICD). Rob was doing well and getting his confidence back when he again passed out. This time, his ICD shocked his heart back into normal rhythm.

“I was driving and stopped at a red light when I passed out and the ICD went off,” he says. “I couldn’t process what had just occurred, and then the light turned green. The hospital was just a block away but I wasn’t thinking straight so I drove home instead.”

Rob also had an event at a tennis tournament, and another time he started feeling the start of an episode when he was in the hospital. “I heard an announcement, ‘Emergency assessment team, room seven, stat,’” Rob says. “I thought, at least I’m better off than that guy. Then it hit me that I was in room seven.”

A New Heart and a New Life

As Rob’s heart function deteriorated, it became apparent that he needed a heart transplant. He was on the waiting list for a heart for about three months before he was transplanted, at age 59. Rob now adds one more stage to his life with DCM — after getting a new heart he felt very grateful and very lucky.

“It’s basically a cure. With this disease you can get very sick, but you’ve got a get-out-of-jail-free card, which is a heart transplant,” Rob says.

That doesn’t mean it’s easy, though, and one of the most difficult parts of having DCM is thinking about your own mortality. Rob says he was good at denial, and it was hard for him to accept his disease.

“It was emotionally difficult and scary,” he says. “But once I accepted my diagnosis, the next steps weren’t so hard.”

Rob advises people with DCM to do everything they can to maximize their capabilities. That starts with using the DCM Foundation website or social media forums, such as on Facebook, to find a physician who is knowledgeable about DCM. It can also mean taking medications and getting a pacemaker or an ICD. And, if necessary, having a heart transplant.

“Recognize that this condition doesn’t mean life has come to an end,” Rob says. “You can have a very full and productive life with DCM.”

*Medical Disclaimer: All DCM patients are different. Information presented on the DCM Foundation website is not intended to be a substitute for professional medical advice, diagnosis, or treatment. Please consult your physician, cardiologist, or other qualified health providers with any questions you may have regarding a medical condition and/or before doing any activity.