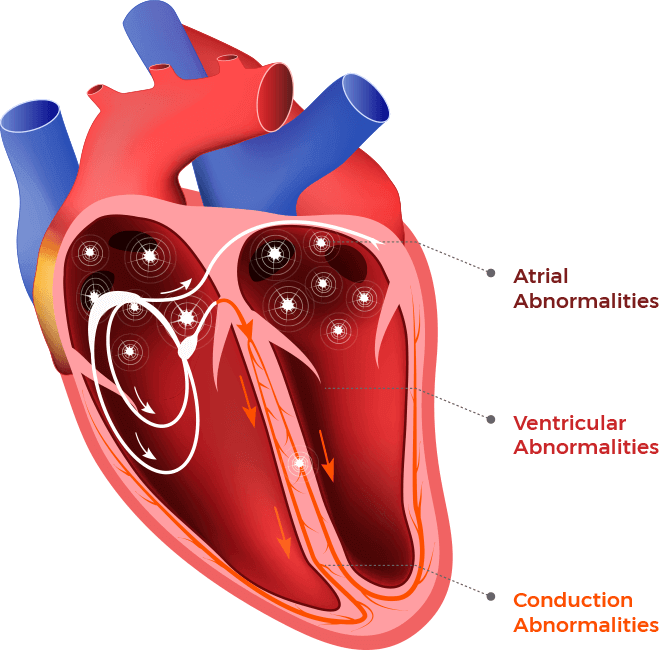 The normal electrical signals of the heart that control the heart beat are disrupted during arrhythmias. Arrhythmias are not specific to DCM; they can occur in individuals who do not have DCM. However, there are certain arrhythmias that commonly occur in people with DCM. These are the arrhythmias we will discuss.

There are three categories of arrhythmias that commonly occur in people with DCM:

Some arrhythmias cause palpitations, the sense that the heart is “skipping a beat,” beating too fast, or beating very hard. This can last for seconds to minutes, or even, occasionally, for hours. With rapid heart rates, individuals may feel dizzy or lightheaded, or experience shortness of breath with minimal activity.

A more severe symptom of arrhythmias is called syncope, the medical term for complete loss of consciousness. Other common terms used for syncope include “a blackout spell” or “a fainting spell.” Because syncope may be caused by more dangerous arrhythmias, it always requires immediate medical attention.

> Click on the heart rhythm abnormality for detailed information and personal videos.

The two most common atrial arrhythmias that occur in persons with DCM are atrial fibrillation and atrial flutter. These are two distinct types of arrhythmias, but they are often related to one another. Atrial fibrillation is the most common abnormal heart rhythm. Atrial flutter is a more organized heart rhythm abnormality and often originates from a very specific area in the atria.

View
Videos
The normal electrical signals of the heart that control the heartbeat are disrupted during arrhythmias.