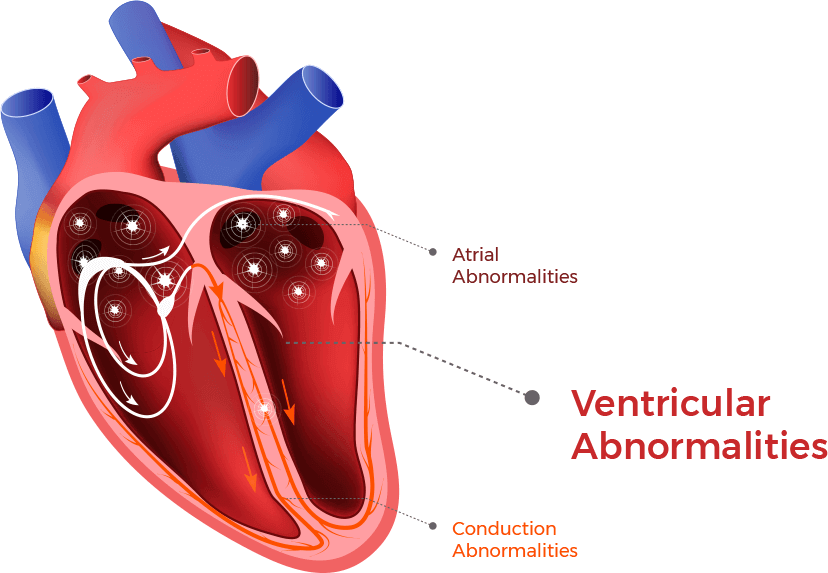 What are Ventricular Abnormalities?

Premature Ventricular Complexes (PVCs) are electrical signals that originate from the ventricles and occur even when the normal electrical signals are present. PVCs can be seen on an ECG as extra complexes that occur earlier than the next normal complex. They are followed by a compensatory pause, which allows the normal electrical signals to resume their normal rate and pattern. They can cause the heart to contract (a heartbeat), but often do not cause the heart to contract or the contraction is weaker than usual. PVCs can occur infrequently or frequently. If they occur frequently in a person with DCM, they can further impair the heart contraction and symptoms of heart failure can worsen.

If the monitor confirms a high number of PVCs, therapies to suppress them will then be considered, including specific drugs and ablation therapy. Beta blockers are the best drugs to decrease or suppress PVCs in DCM. However, when beta blockers are not effective, other drugs, or ablation therapy (the use of catheters and forms of energy to destroy tissue from where the PVCs originate), can be considered. It is appropriate to consult with cardiologists who specialize in heart rhythm abnormalities (electrophysiologists).

There is a broad spectrum of how VT is tolerated by a person. VT can occur without any symptoms. However, even if it occurs without symptoms, VT can deteriorate into Ventricular Fibrillation (see below), making it a life-threatening heart rhythm. Symptoms can be mild (palpitations, light-headedness) to more severe (chest pain, shortness of breath, feeling faint or a feeling of doom), to actually losing consciousness (syncope) and possibly death. VT can also cause low blood pressure because the heart does not contract normally and pump blood effectively.

Since all individuals with DCM and an ejection fraction of 30 to 35%, or less, are at high risk of developing VT, they meet criteria for an implantable cardiac defibrillator (ICD), which is implanted like a pacemaker. It monitors for VT and Ventricular Fibrillation (see below) and, if detected, delivers therapies to stop the VT and return the heart to a normal rhythm.

One such therapy is to deliver high rates of paced beats to stop the VT. The other therapy is to deliver shocks to stop the VT. If a person is having a lot of VT and is at risk of getting many shocks to treat it, specific drugs are used in addition to the ICD to either prevent the VT or slow its rate. One of the most commonly used drugs is amiodarone.

Sometimes VT is caused by scar tissue in the ventricles. This type of VT can often be treated by ablation (the use of catheters and forms of energy to destroy tissue from where the VT originates). It is appropriate to consult with cardiologists who specialize in heart rhythm abnormalities and these procedures (electrophysiologists).

This ECG shows a short run of VT.

This ECG shows a normal rhythm at the start with a single PVC (arrow) and then the development of VT. 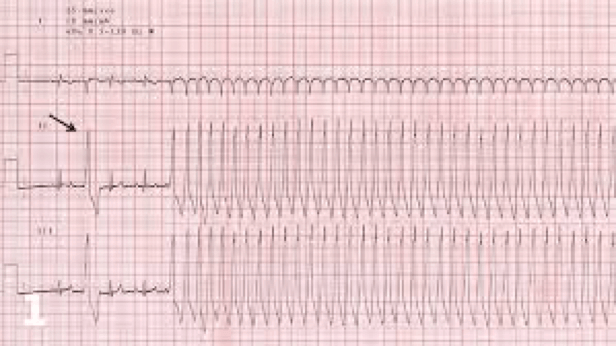 Ventricular Fibrillation (VF) is always a life-threatening rhythm because the heart is unable to contract and pump blood. VF will cause death if it is not terminated and is the most common cause for sudden death, or sudden cardiac death (SCD). These are terms used to describe loss of consciousness accompanied by loss of heart beats, blood pressure, and breathing (cardiac arrest).

A person in cardiac arrest must undergo successful cardiopulmonary resuscitation (CPR) to survive. One of the most important interventions during CPR, in addition to chest compressions, is to deliver an electric shock over the heart, which is the best therapy to stop the VF. Automated External Defibrillators (AEDs) located in public areas are used for this purpose.